Less than a year ago I had never heard of Western style horse riding nor the Western Equestrian Society.  Having attended the Sovereign All Breeds Summer Show in June 2021 the 29th WES National Championships was the next event on my list of Western riding events to develop my growing interest in the sport. 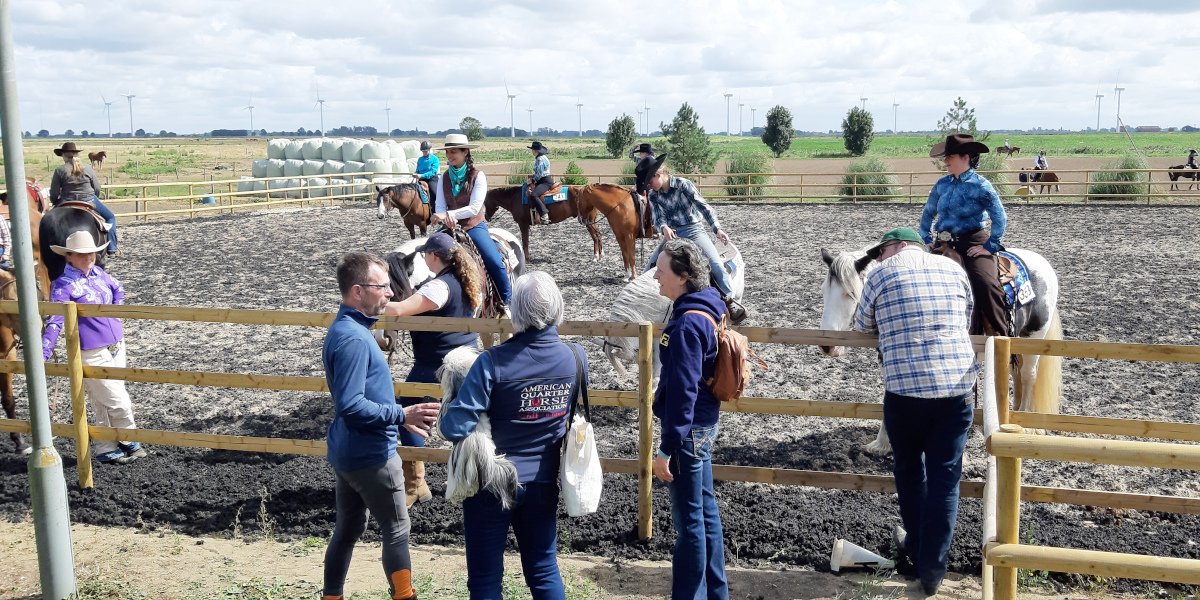 Spectators at the Outdoor Arena 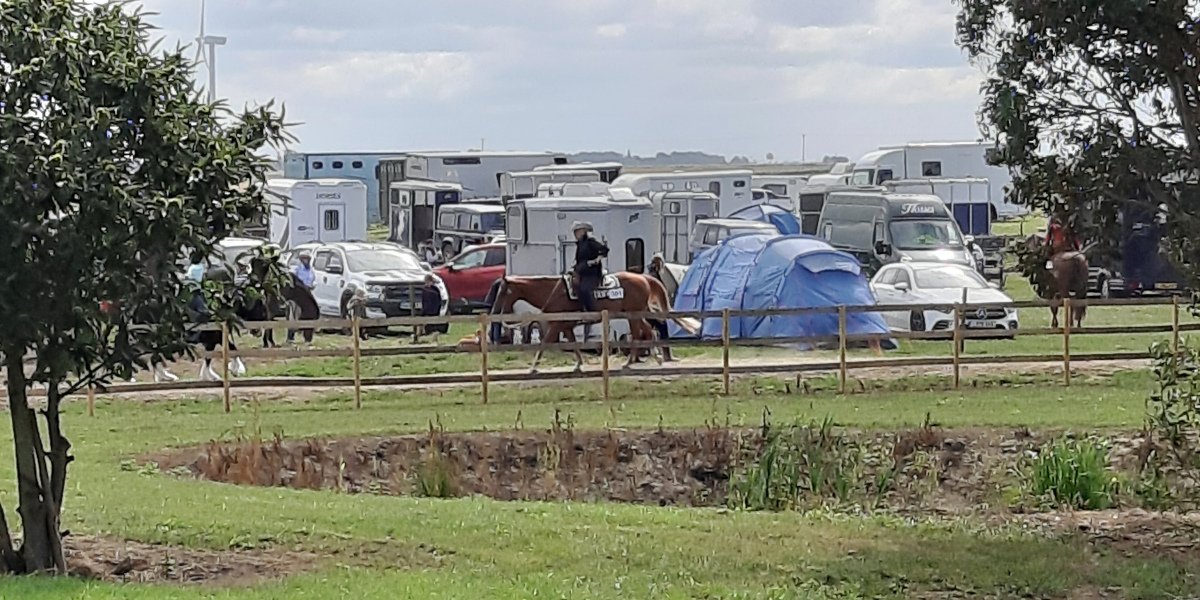 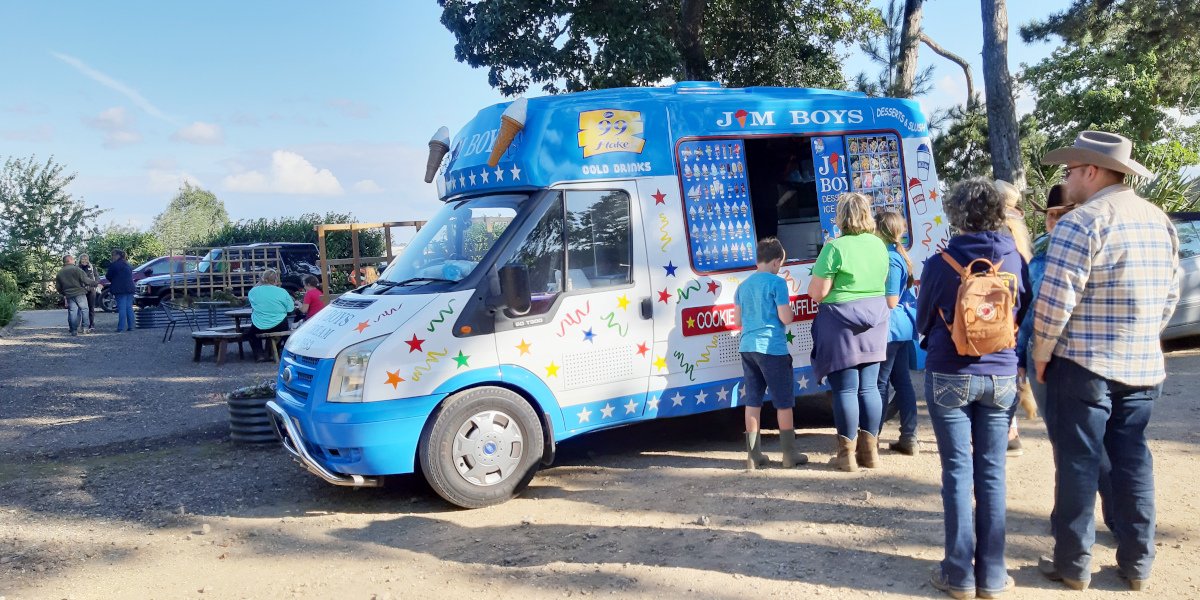 Icecream Icream We All Scream For Icecream 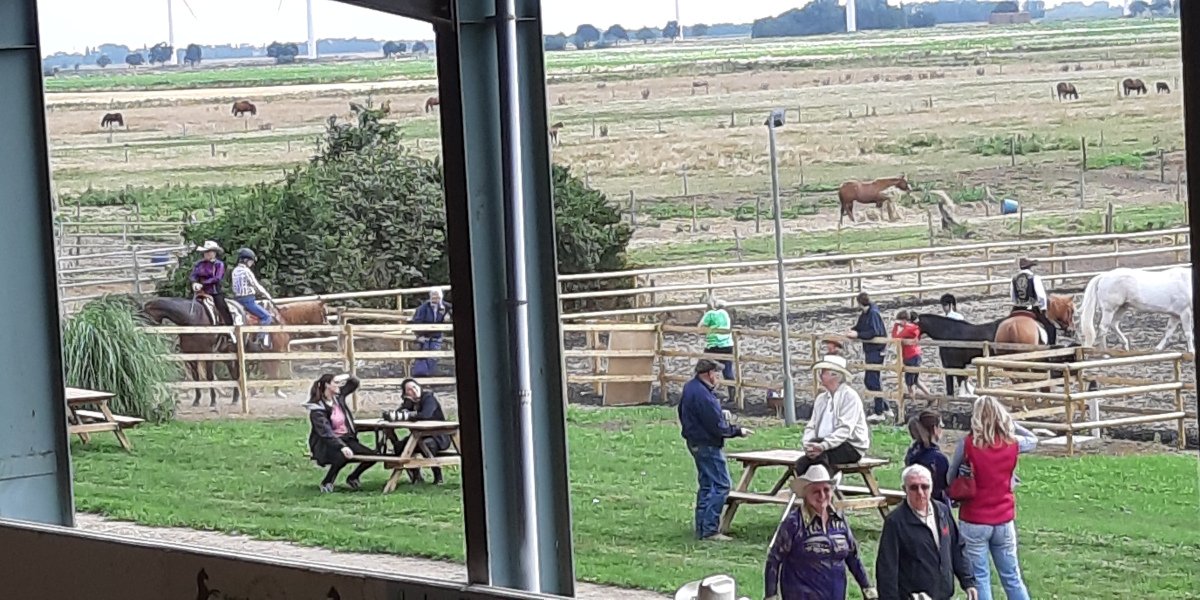 View From Indoor Arena Through to the Outdoor Arena 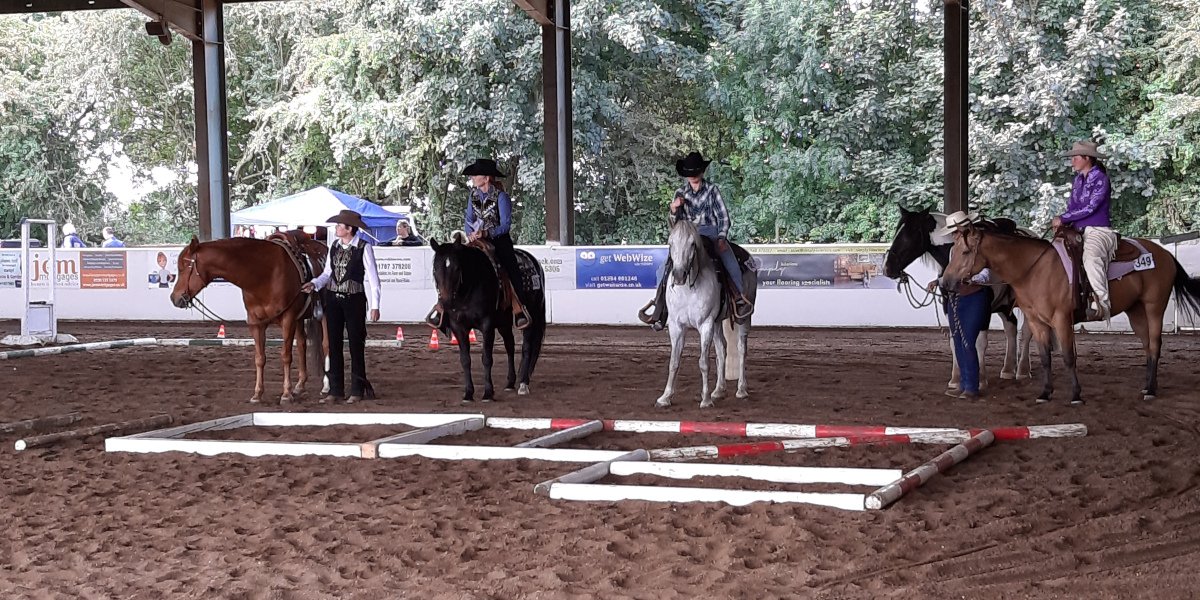 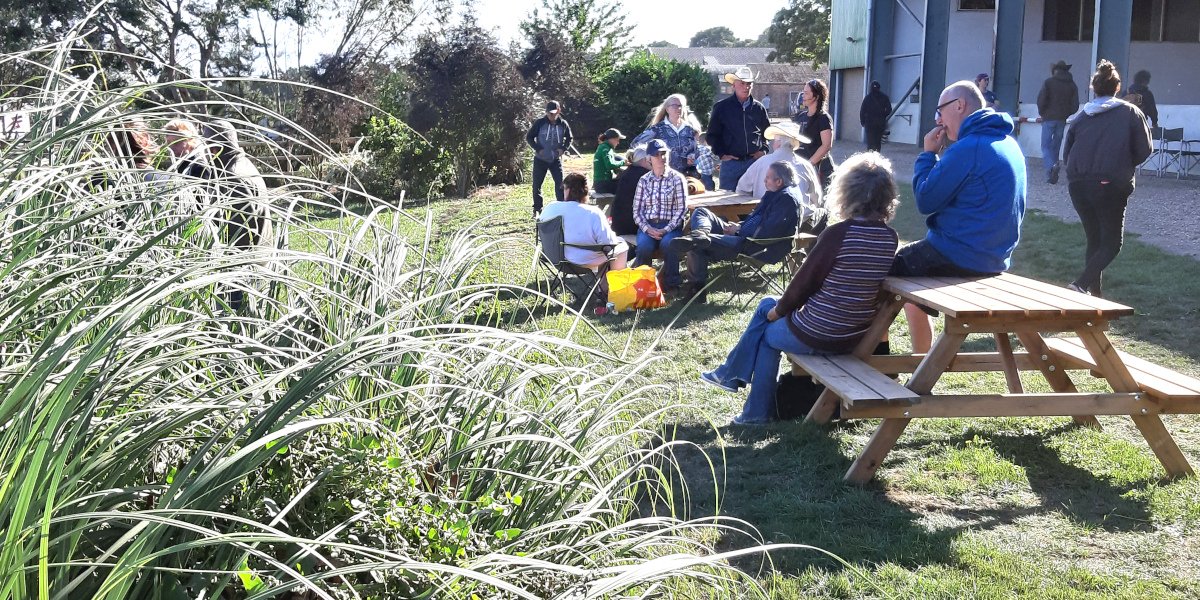 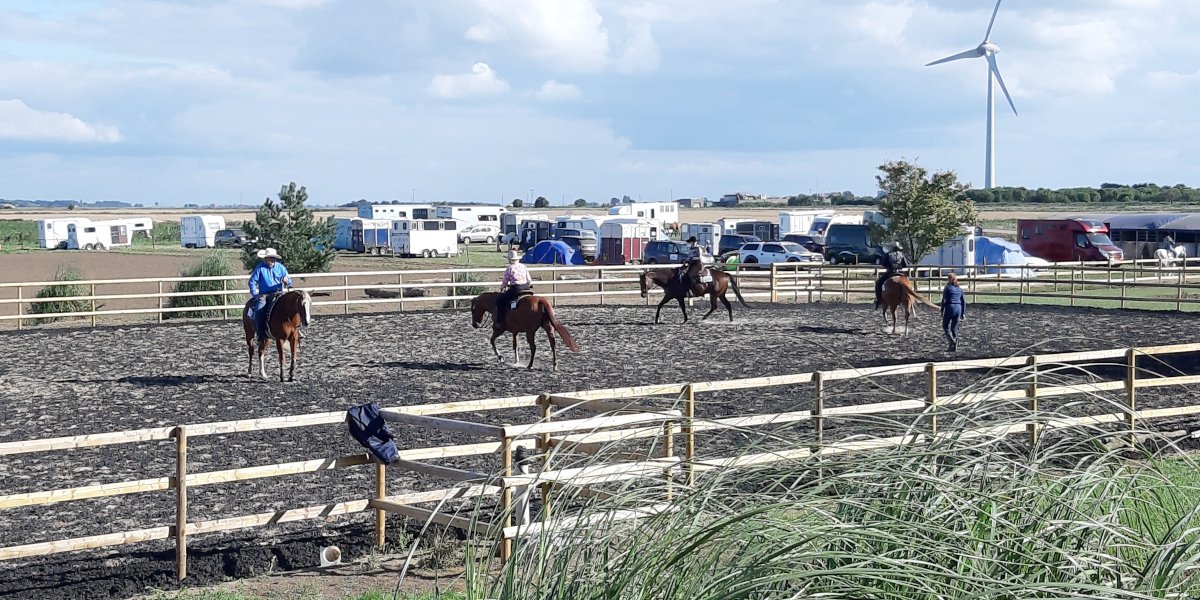 View of the Campsite Through The Outdoor Arena 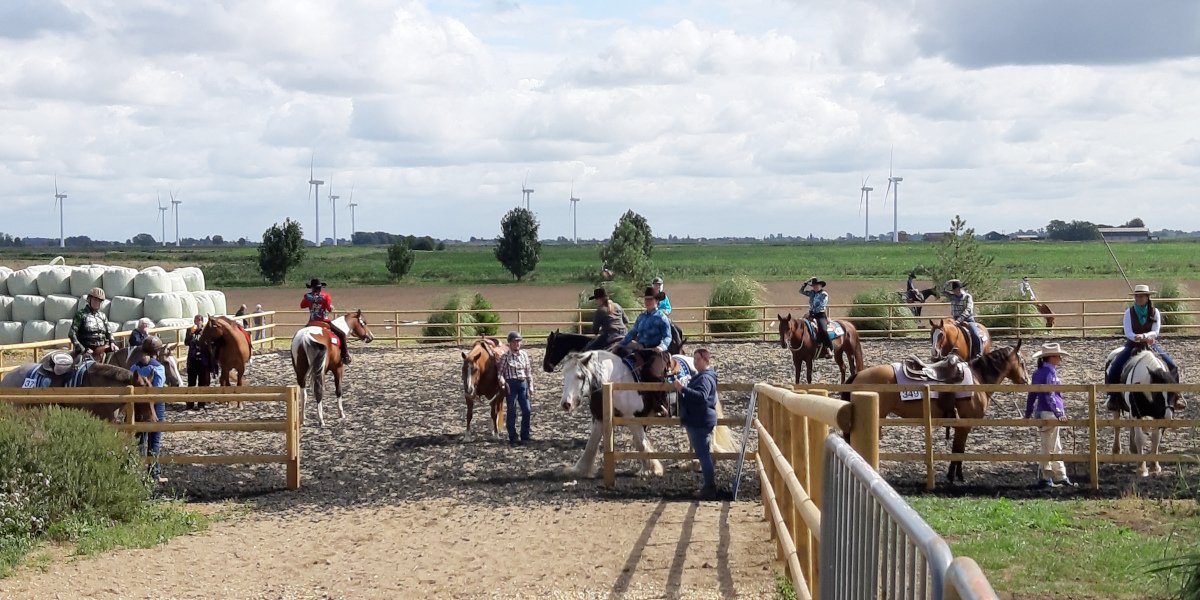 Competitors Waiting in the Outdoor Arena 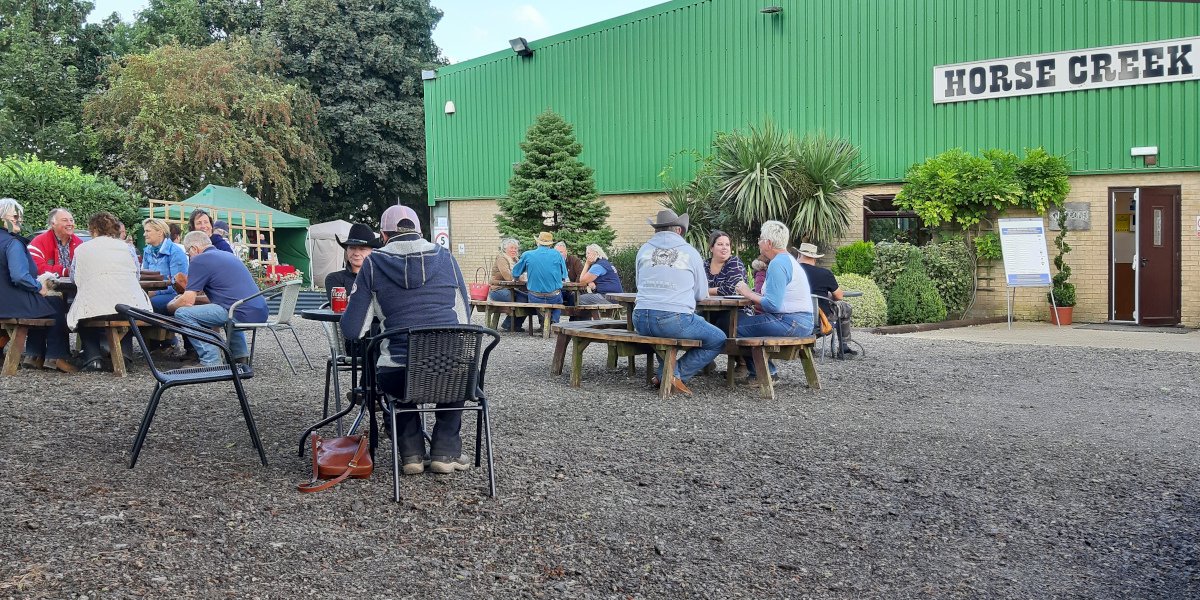 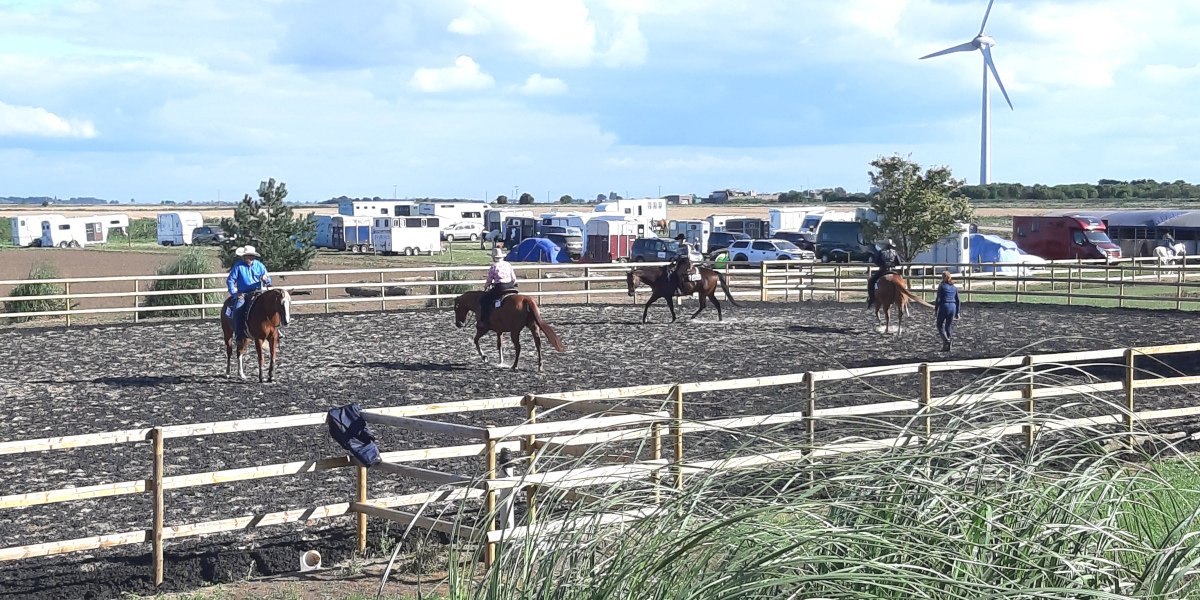 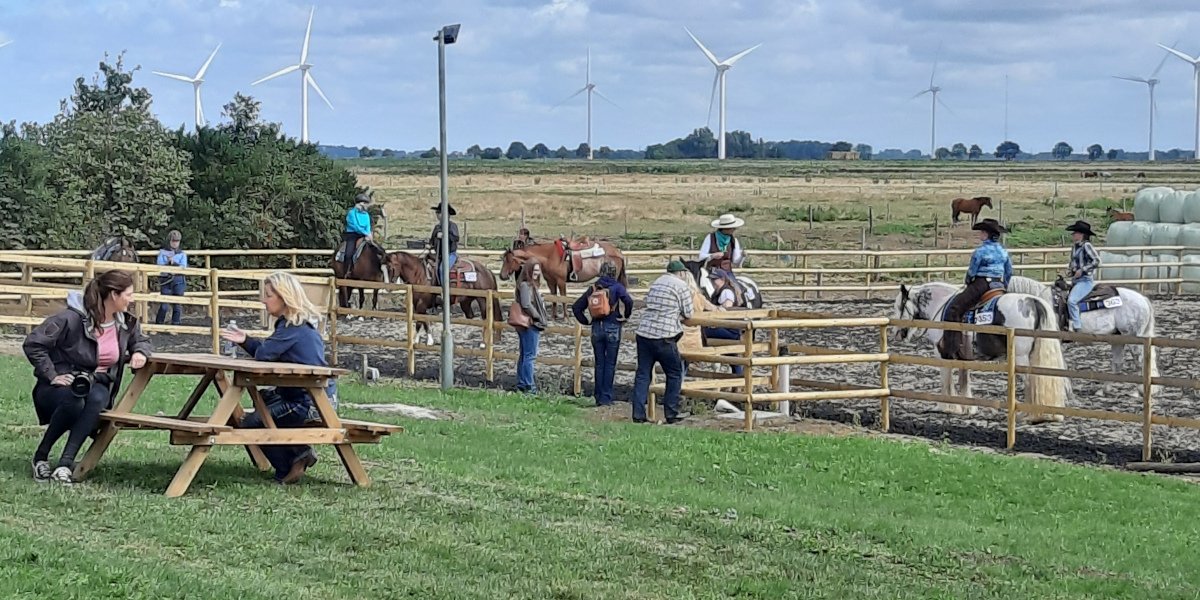 Alfresco Dining With a View of the Outdoor Arena 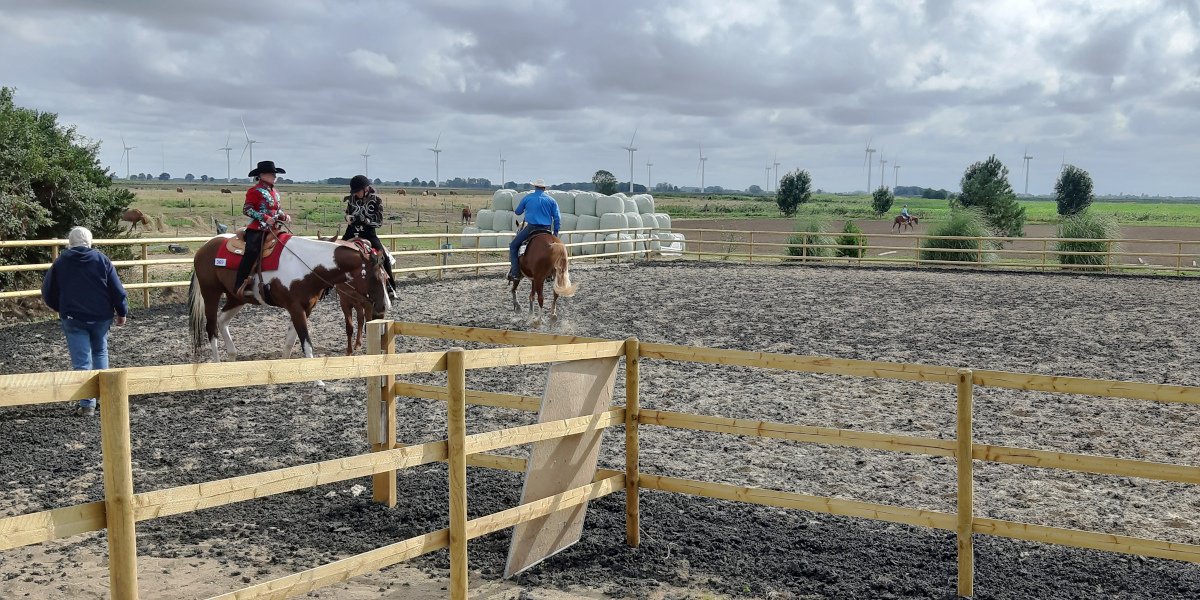 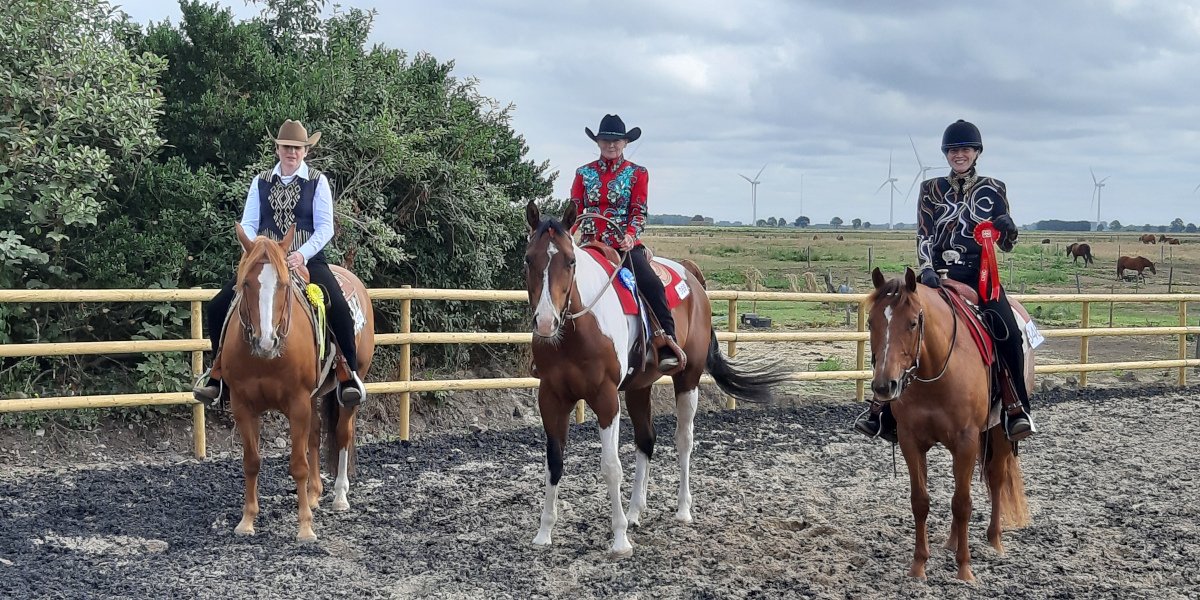 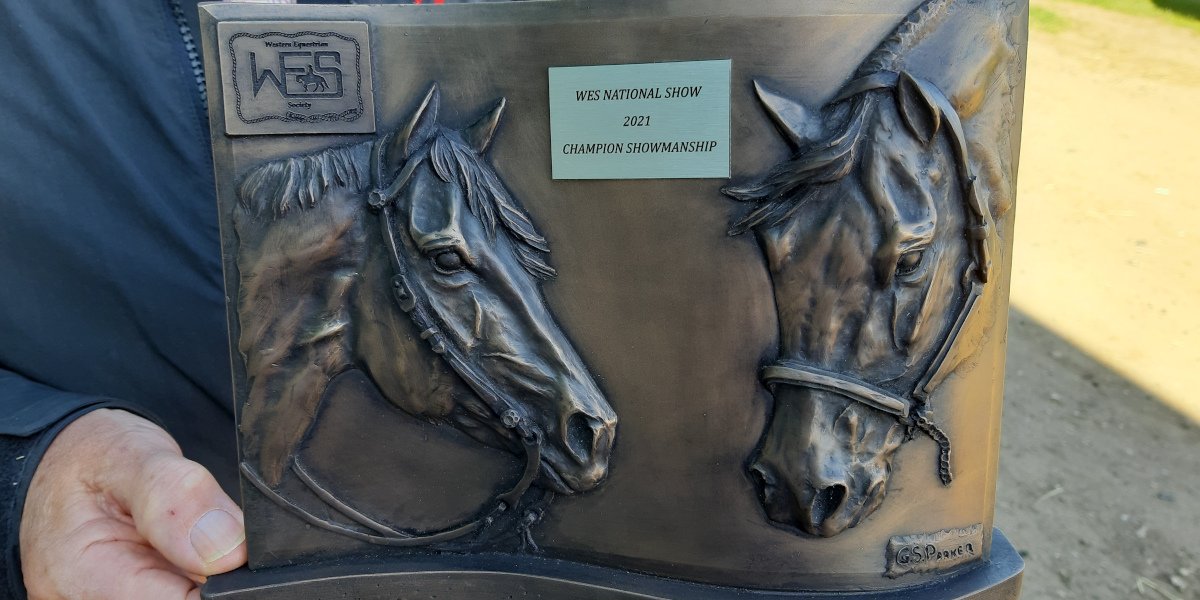 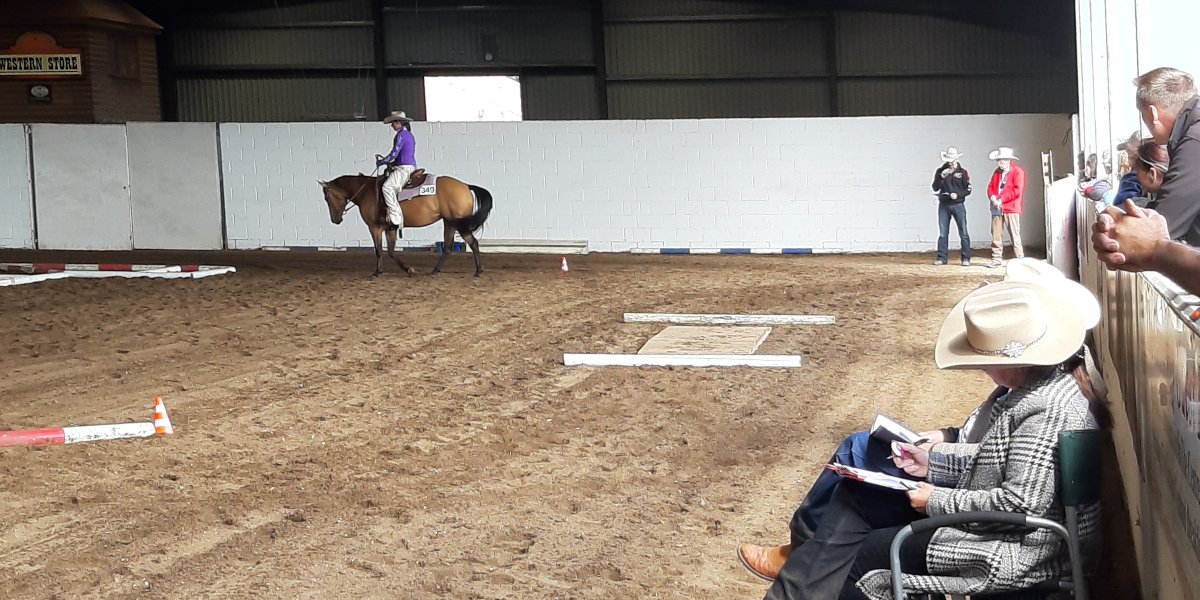 Late on Day One of the WES Championships

I arrived at Horse Creek Farm very late in the afternoon of Friday, 27 August, and day one of the 29th WES National Championships had come to a close.   The arenas were empty as the horses were no doubt being fed, watered, and settled for the night following the excitement of the day.

The outdoor eating area was blooming with colour and looked really inviting.  The catering kitchen staff were just finishing up and David and Sarah were getting into catering mode for the evening meal orders.  In the nearby field, there were hordes of caravans where competitors and supporters were camped out for the long weekend.  I soon got settled myself and then I enjoyed a tasty home-cooked Lasagne and Chips in the upstairs bar in the very agreeable company of Frances and Alex Payne surrounded by other attendees.

Conversation with Frances and Alex centred around Frances’ new-found recent fame on the Sovereign Facebook page where a gorgeous photo of Frances with JP (23 year old “Seren Jolly Profit” by Red Hot Profit and out of Seren Jolly Bars) dressed in her best Western attire had been posted.  I was not acquainted with Frances back then, so it was interesting to actually meet her and hear about her progression in Showmanship and Western riding skills.  The hard work put in by JP and Frances and their training at SQH proved that even at 23, you’re never too old to win!  Over the course of the weekend, Frances won an amazing clutch of Awards:

We chatted for some time but then It was time for an early night to ensure the competitors were ready for the next day’s events.

By 9.30am Horse Creek Farm was alive with activity.  I chatted on and off through the day with the changing BNI stall holder team (the networking group that brought myself and Sarah together). Then I wandered round and talked to many of the other stall holders who were there offering their equestrian wares.  They were all very friendly, chatty and keen to be there.

One of the event sponsors, Sarade, had their own stall with an amazing range of Western style boots and shirts.  I fell in love with some very stylish boots which were more high fashion than riding boot.  It was probably a good thing my size was not available!

I also had a chat with Sandy Barton from Mapplin in Nottingham about her eye-catching Western themed cushions.  Sandy told me that she made everything herself and the fabrics were all especially imported from the USA.  If you would like to learn more then contact Sandy through Sandy’s Cowboy Cushions Facebook page.

There was even a pre-loved Western items stall.  In conversation, I learned that WES ran this type of stall at every Annual National Championship to support its members who want to sell the items they no longer need, such as show clothes, tack, blankets, rugs etc, rather than selling online.  What a very good idea, I thought.

Having explored the wares on offer, I decided food was in order so a hearty cooked breakfast from the kitchen soon set me up for the day ahead.  Throughout the day, I took hundreds of photos moving around the indoor arena perimeter and spent some time viewing from the upstairs bar and downstairs café areas.

I took in the atmosphere, listened to some of the comments of the spectators.  One indoor arena spectator clearly said to their companion: “… it is so sedate, skilled and easier than the English style”.  From my inexperienced eye, even I could see that the horses and riders were most definitely “sedate” and “skilled”.

Horse painter, Nicola Ottley was among the many spectators.  In conversation Nicola told me that she really wanted to become a Quarter Horse owner one day.  When I mentioned the distances many of the visitors and competitors had travelled to be there, Nicola said: “It is worth the journey.  You learn such a lot.”   It was clear that travelling to spectate at the shows was all part of the learning journey newbies to Western riding go through.


A Real Part of the Western Equestrian Community

I really felt the warmth from the Western Equestrian community and that I was among friends with a common interest; an enthusiastic group keen to welcome the inexperienced newbie and to share their passion.  I felt very much a part of the community even though it was only my second experience of a Western event.


Scottish Competitors In Western Style and Dressed to Impress

A beautifully dressed trio of ladies attracted my attention.  I caught up with them in the outdoor arena.  They had travelled 11 hours from Aberdeenshire just to take part in the show and I later learned the return home was a good 12.5 hours!  It transpired that long distances are nothing new since the hub of Western riding is focused down South, taking them to places such as Bodium, Oakridge, Warwickshire, Bristol, Edinburgh, Glasgow, Fife, Hampshire, Essex and who knows where else.

WES approved instructor, Sandra Loder, (WES Area 1 which is the Grampians and Highlands) was happy to talk to me on behalf of the group.  She let me know how much she enjoyed teaching and training the horses and how Western riding has become a big part of her life over the past 20 years.  Prior to this Sandra had enjoyed many years doing dressage, show jumping, saddle and hunter showing, all English style.

Sandra was with her horse, Lenny (Check N Tuff, a Sovereign bred Quarter Horse 2011 foal by “Checking” out of “Smart n Tuff Remi”) along with WES instructor, Arlene Cluness (on William (“Brave Will Win”) and Kim Collier (on her Chestnut Cody (“RQH Electric Tartan”) from Edinburgh.  She told me that their long-standing friendship had grown over decades through their love of Western riding which was how they all met initially.


Success For Our Scottish Trio at WES National Championship

It was a worthwhile trip down South for all three ladies though:

We talked about the low number of Western Shows in Scotland -v- England.  Sandra told me that things are done on a smaller scale in Scotland with events typically limited to two shows in June and September each year in either Edinburgh or Fife.  The travelling distance between venues and lower numbers mean things are done on a smaller scale.  This, however, did not stop trainers from the South visiting Scotland to do Clinics, generally organised through an Area Rep from WES.  Sandra advised that: “We Scots tend to put in a lot of effort when we head South for shows as it’s such a long way.”  Well the ladies certainly lived up to their reputation the day I visited is all I can say.

Sandra is clearly an experienced and seasoned Western rider and trainer having chalked up, in her words: “Too many Awards to count including two Superhorse Championships 2007 and 2009 on different horses and probably six or seven American Quarter Horse High Point Awards.”

By early evening it was time for dinner so I enjoyed a delicious Steak and Chips in the bar, or should I say “saloon”?

After dinner, David Deptford and judge, Bob Mayhew, kept everyone engaged for best part of an hour answering a barrage of questions about Western riding and the many stories they had to tell.  Bob’s story of how he got into Western riding had us all chuckling.  Collectively David and Bob probably have 80 years of Western riding expertise.  Wow.  I think we really need more than an hour to learn everything they could teach though!

Following the close of the WES National Championships on Sunday, 29 August 2021, Sarah, and David said:

“We would like to congratulate the WES Show Team for running an excellent show and Bob Mayhew for his awesome judging.  We really felt there was a fantastic atmosphere and certainly no worries on our part from the WES team.”

Sarah went on: “We would also like to say how proud we are of the Sovereign team competitors.  Well done also to Rebecca Holt riding “Jack Tee Higgins” for her Hi Point Award win.  Each and every one of them rode and showed their horses brilliantly.  It makes breeding our beautiful American Quarter Horses so rewarding.”

There are many opportunities to see great Western showmanship going on throughout the year here at Sovereign, but we would remind you that the 30th Western Equestrian Society National takes place on 26-28 August 2022  so do save the date.  Look out for the updates from both WES and from Sovereign via our websites and social media.

Want to keep up to date? Subsribe to our newsletter

All the latest news on events, clinics and, of course, our latest foals is delivered to your mailbox free of charge if you want to know what's happening at Sovereign Quarter Horses, sign up now.