Father’s Day at the All Breeds Summer Show 2021

I have not really had the opportunity to delve into horse riding of any kind in my life until, in late 2020, I met Sarah and David Deptford.  I was really intrigued with the idea of Western riding following our meeting.  This inspired me to pop along to the Sovereign All Breeds Summer Show on Sunday, 20 June 2021 to see what it was all about.

My friend and I arrived soon after 9am as horses of all breed types were being unloaded from their trailers.  Among them was a dainty little Shetland pony which really made me smile.  She really was so adorable.

The early part of the programme was underway and some keen horse owners were already going through their paces with some spectators lending their support at the edge of the arena.

Show Patterns Indicate What Each Horse and Rider Must Do

I did not really understand what was going on or what was expected of the horses and their riders.  I later learned that there was a series of classes for the respective class entries to complete.  When I looked at them the 20th June 2021 Summer Camp Show Patterns clearly showed what the horses and riders were meant to do.  The judges looked very busy throughout, assessing each different pattern class for the Walk/Jog, Novice, and the Open Categories with a horse and rider combination.

It was a wonderful atmosphere at the arena despite the small spectator numbers due to Covid restrictions. When we looked through the arena to the outside, we saw it was surrounded by open fields where a group of Sovereign horses were grazing.   I guess they were enjoying a nice rest amidst all the activity as it appeared not to involve them.

When opportunity allowed, we had some short breaks between the events to enjoy tasty burgers and chips for lunch with very welcome hot drinks (it did get a little chilly).

Throughout the day we watched most entries as they demonstrated their showmanship and did their best to wow the judges.  We particularly loved watching the tiny Shetland pony we had met at the beginning as she went through her paces.


Supporters Include a Proud Father Or Two

There were undoubtedly many proud family and friends cheering on the participants but one young rider being cheered on by a proud Father (sitting astride his own horse) caught our attention.  It was a real joy to observe this young horse and rider team together after they had won a beautiful pink rosette.

They had a noticeably strong and special bond and observing such a supportive Father being there for him was heart-warming, particularly as it happened to be Fathers’ Day.  We therefore continued to look out for them throughout the day as much as possible and resolved to seek them out after the show.

When we did catch up with them, we learned they were Luke de Cort (riding Gotta be a Vaquero – fondly known as ‘Cowboy’) and his Father Neil de Cort (riding Cosa Reed – fondly known as ‘Tango’).  Luke and Neil kindly allowed us to take some photos of them all.  In our conversation we learned Luke was just 17 (turning 18 in July 2021) and into his second year of a 3-year City & Guilds electrical installation course.  He was looking forward to the full apprenticeship he had lined up for when he gained his qualifications.  Luke explained that he was spending the Summer with his Dad and their horses which are stabled near Thetford.


Riding Western Style Before He Could Even Stand Up

It was fascinating to appreciate that Luke began riding Western style at an incredibly young age.  In fact, I was told by his Dad that Luke was sitting on a horse before he could even stand up. Throughout his life it has apparently always been Western style riding, having sat on an English saddle just once in his life.

In contrast, his Dad did things in reverse.  Neil began riding English style as a child, taking part in show jumping and cross country and even playing polo.  Neil confessed that he would very much like to drive a horse and cart but says that is for when he is older and needs to take things a little slower.  As our conversation progressed, we learned that Neil began Western riding some 25 years ago after he saw David Deptford giving a demo of Western riding at one of the regular Sovereign Quarter Horses Open Days.  David was riding Snippers Heriogance (fondly known as “Snipper” – sadly now deceased) and from that moment Neil fell in love with it all and has not touched an English saddle or horse since.

Neil said: “Every horse from David’s yard is just beautiful.  Never seen a bad one.  Knowledgeable man.  Lovely family.  Great people to know.”  Neil went on to say: “I get so much pleasure from Western riding for many reasons but mainly because it is kind on the horse.  The English style restrains the horse too much and puts them under pressure.   You are connecting with the horse more.”  This was confirmed to us by the depth of the bond we saw between Luke and his horse, Cowboy.


Riding Western is a Family Affair

It turns out Western riding is really a de Cort family affair as Luke’s 21-year-old brother Mason is also a good rider and has ridden Western since he was two years old.

Astoundingly, Neil also told me that none of his family had ever worn hard hats to ride!

Luke rides in in the Brandon and Thetford area and his Dad rides with him when he can.  Since Neil spends more time in London working riding together does not as often as they would like.

I asked Luke how it felt to win his first rosette.  Luke corrected my misunderstanding saying: “This was really my first big Show, but I have now won TWO rosettes on Cowboy.”

His Dad said: “Luke trained Cowboy himself through lockdown.  It is all his own work.  I helped him but Luke did the first ride and was thrown for the first three rides.  Wind, rain, snow, sleet Luke rode.   I am very proud of what he has accomplished with Cowboy.”

Luke acquired Cowboy as a yearling (one year old to someone like me) and that he is one of the horses bred by David at Sovereign.  Cowboy is now 3 years old, and he had so far only taken part in some small shows at the Brandon yard.

It was clear to us that both Father and Son really enjoy their quality time together enjoying a shared passion for their horses.  When I asked what was happening for Fathers’ Day for them, I was told the Show was the real treat as far as his Dad was concerned as it showed how far he has come.  That is a fantastic present for any Dad for Fathers’ Day I would say.

For me, as a complete novice, everything I heard, and saw was very reassuring indeed.  It has strengthened my resolve to have a go at Western riding myself at one of the upcoming Western Experience Days planned by Sarah and David.  I must ask for the new dates as I know that all Western Experience Days are booked through to late October 2021.  I had better be quicker at checking the November dates than I have been in writing this guest blog! 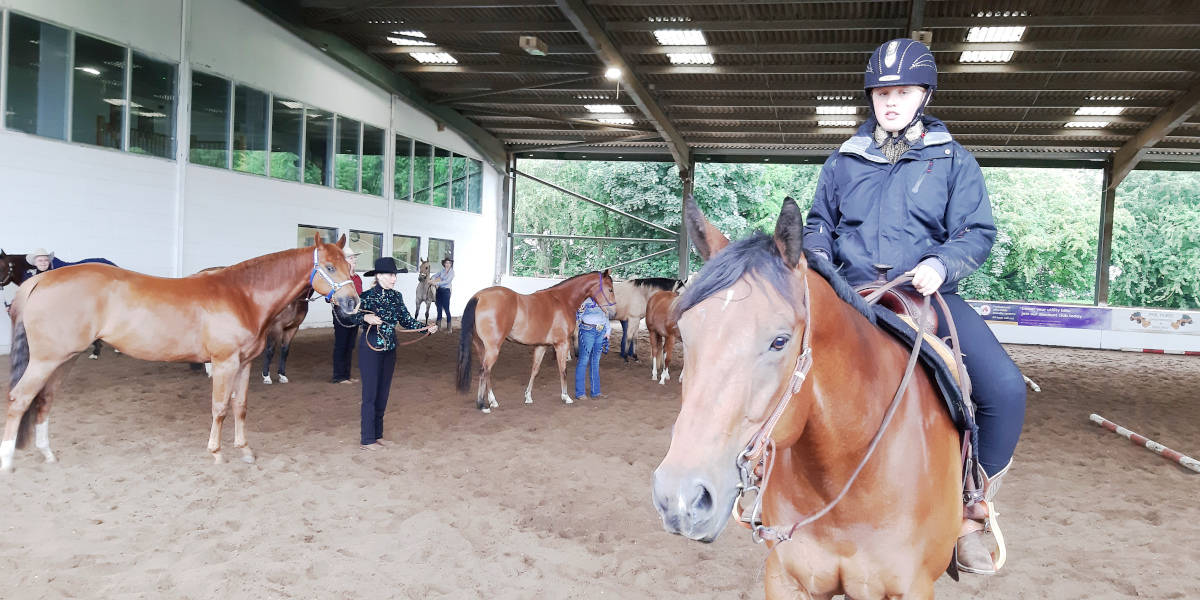 Before I forget, I did note that David and Sarah are hosting the 2021 Western Equestrian Society National Championship Show on 27th, 28th and 29th August 2021.  This is definitely in my calendar already.  Spectators are very welcome to enjoy the event at no cost and it seems too good an opportunity to miss for a day out.

If you would like to learn more about Western Experience Days or the 2021 Western Equestrian Society National Championship then please email for more information.

Want to keep up to date? Subsribe to our newsletter

All the latest news on events, clinics and, of course, our latest foals is delivered to your mailbox free of charge if you want to know what's happening at Sovereign Quarter Horses, sign up now.